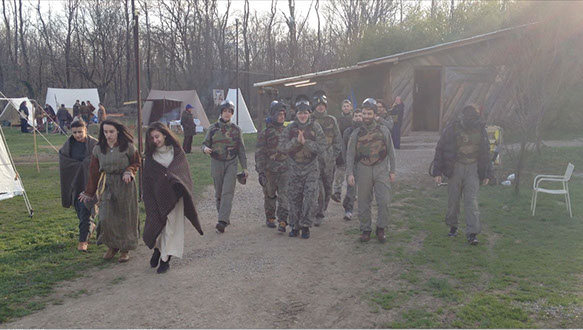 SK: “It’s very strange to see how our generation is figuring out not only why we’re different, but also how to ask why our generation of twenty- (and thirty-) somethings is so fucked up. It’s like we’re in a movie co-written by Woody Allen and Kathy Acker, though we cannot quite reach that which is our stubborn reality.”

MDA: “For sure there is quite a lot of commiseration with what I meant, but for me it dwells more in the factual destitution of our everyday life, in which, besides family, we are pretty alone. I feel that for us the novel would mean a move toward responsibility with regard to our community. I mean, we could choose to leave this story to people’s chit-chat—that would definitely turn it into mythology, if you just think about the Italian leaning toward drama—and be fine with the definitive version that would come out of that; or even worse, wait for a miserable researcher who would finally be preoccupied by this story—because there will always be a researcher who will come knocking when you have done something that is in a way pioneering in your local context. Or we could write the story ourselves.”

Le Petit Jeu is a writing workshop sponsored by Gasconade and developed in collaboration with the Art, Science & Knowledge ( ASK ) research center of the Bocconi University. Since December 2015 the workshop is held on a weekly basis and is hosted in the ASK offices. The meetings are aimed at drafting a choral novel that describe and disclose the growth of Milan’s artistic community in the background of the great political, social and urban changes that have affected the city from 2000 to 2015.

As a closing moment of Michele D’Aurizio’s residency at Villa Romana, drafts of some of the novel’s chapters will be read to the audience.

Michele D’Aurizio (b. 1985) is Managing Editor at Flash Art International. He’s the co-founder of the project space Gasconade in Milan. He organized exhibition at Galerie Balice Hertling, Paris; Boatos Fine Arts, São Paulo; Ellis King, Dublin; Flash Art NY Desk, New York; Fluxia, Milan; and Grand Century, New York. He was 2012 curator-in-residence at the Fondazione Pastificio Cerere in Rome, and co-curated with Eva Fabbris the 2010-11 program of the Kaleidoscope Project Space in Milan. He was Associate Editor at Kaleidoscope and Editorial Assistant at Mousse. His writing appeared in Abitare, Flash Art, Kaleidoscope, Mousse and Spike. D’Aurizio received an MA in Visual Arts and Curatorial Studies from the Nuova Accademia di Belle Arti – NABA in Milan. He lives in Milan.

His curatorial practice is grounded in an attempt to revise strategies of art production and distribution within the context of the contemporary art industry. In particular, his interest lies in generational values within art production and the question of how peripheral communities engage with universal aesthetic preoccupations.